…. a tropical heat wave, the temperature’s rising, it isn’t surprising, she certainly can can-can….Irving Berlin wasn’t referring to the weather when he composed this. It would not be PC to write this many years on when the summers seem to get hotter and hotter and the damage to property and wildlife is more widespread ( and the danger to life).

Not so far from here 100 hectares of pine forest were blazing yesterday near Anglet by Biarritz. How did it happen? That is what the authorities need to establish. It only takes a spark to cause a conflagration. Almost exactly three years ago a discarded cigarette end is believed to have caused a massive forest fire that destroyed 800 hectares of land in the south of  France. More than 800 firefighters and 210 fire engines were drafted in to tackle it. 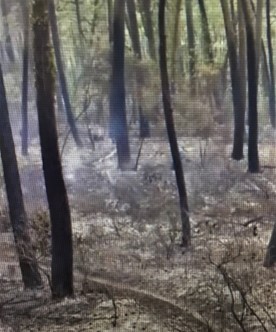 Three houses near Anglet were completely destroyed and 100 people evacuated. Firefighters from Gironde, Landes and Lot-et-Garonne were called in and reinforcements later arrived from other departments. Two water bomber planes from Bordeaux made 18 drops.

On a more mundane level our  garden is bone dry and the grass various shades of brown. The high point was 42°C, a temperature not reached before in our years here. There is no sign of the heat dissipating any time soon. 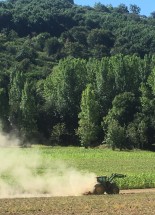 Marc’s field just below us is drier than he’s ever known it. At first we thought a fire had started in the corner, until we saw his tractor come out of the cloud of dust.

Madame went into town and the car was parked for an hour. When she returned the temperature inside was nudging 50°C. Just before the lockdown the air con stopped functioning. The garage closed for the duration and was so inundated with work when it re-opened that it took three weeks to make an appointment. It has, mercifully, been repaired but at considerable cost.

The hens are looking dishevelled. They pass the day in a copse at the end of their run venturing out to lay, which they are doing with surprising regularity; 140 eggs in July from 5 birds is remarkable in this heat. The nesting box has a metal roof, designed to withstand the fierce hail storms which can hit you without warning here; trouble is that it gets so hot you could fry one of their eggs on it. Not advisable to leave eggs there all day in case they become hard-boiled. Bizarrely the speckled grey has taken to producing large, corrugated eggs that an ostrich would be proud of.

The advantage of living in an old Basque house is that it is cool in this weather. With walls nearly a metre thick at the base, and with heavy shutters, the heat is kept at bay (and the warmth in during the winter). I say ‘old’ because the house is to us, but 200 years means little here. Its name has berri tacked on to the end which means ‘new’ in Basque.

Madame and I went to lunch recently with a French couple who live in a modern house, well-built, double glazed and with all the bells and whistles you’d expect.  When we arrived all the curtains were drawn, blinds down and the lights on. What the house lacked was air conditioning, but you need a deep pocket to keep that on. 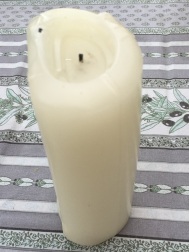 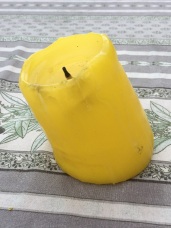 These two scented candles, which had been lit the previous evening to keep mosquitoes away, changed shape during the day. 42°C was more than they could cope with.

The cats are splayed out on the terrace hoping for any breeze that may come their way. The vegetables are wilting but we’re not allowed to use the hose. The only effect of a brief shower was to kick start the weeds which are taking over the garden. One plus is that we have not cut the grass for more than three weeks. At this time of year it’s usually once a week. The acorns and beech nuts are dropping early and crunch underfoot when Madame and I  walk down the lane, something we’ve done on a daily basis since the first day of lockdown. 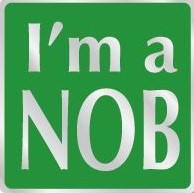