La rentrée; except that it isn’t; it just feels like the real thing.  It’s a fausse  rentrée if you like. Schools that have been closed for weeks are now starting to re-open, cautiously. What is missing is the frenzied rush to the supermarket or papeterie for the stationery that sets parents back a tidy sum each year.

The first sign of activity was the re-appearance of the primary school bus. This is driven by Jean. One word to describe him would be ‘substantial’. He  towers over everybody like an amiable bear; an  ours des Pyrénées. He often had something witty to say to us which we pretended to understand. Madame, who has  been a volunteer at Lourdes for several years, said he was a tower of strength on the annual pilgrimage for the old and infirm.  He owned the cobbler’s shop in the square (more romantic than shoe repairer’s). He didn’t advertise his opening hours. As a part-time fireman his hours were elastic. I use the past tense because Jean has just retired, but more of him later.

The authentic  rentrée  in September is regarded with as much deference as a religious festival. It’s not just an educational phenomenon; it marks the entire country’s return to normality after the summer break. Does France shut up shop before the  rentrée then, you might ask? Well, yes, in a word it does. The government ceases to function as usual, businesses and shops are en congé and people head for the beach or their second homes. If you stay at home you could find your favourite restaurant has closed. It might be different this year of course; how we do not yet know. Now might be the time to review the scholastic terms. France was a country of paysans (small farmers; not a derogatory term here). Labour was needed for the harvest. Perhaps it’s time to introduce a four term year?  Doubtful; this is France, which is resistant to change. The expression à la rentrée doesn’t just mean ‘back to school’, but more like  ‘See you in September’.

Back to Jean. His shop had that comfortable smell of leather and rubber and machines that needed a drop of oil. Chaos surrounded him but he could lay his hands on what he needed. Over the shop front was a sign with ZAPETATEGI on it.  For several years I knew him as Monsieur Zapetategi. It was in Spain that the penny dropped (sou or centime if you prefer). The Spanish word for shoe is zapato and only then did it register that the sign was his shop, not his name. He had reached 62 and decided to retire.

His retirement put us in a spot. It is not a thriving trade in SW France. In summer men prefer espadrilles, which are made locally. You can visit a factory in Mauleon if you’re down that way. In winter trainer type footwear is popular. It doesn’t wear out easily. The Spanish a short distance away over the border emulate the British fashion of conventional shoes, leather uppers and leather/rubber soles. The only repairer within a generous radius is in Saint Jean Pied de Port.  More about  Donibane–Garazi  in a later post.

We don’t know his name but he’s a craftsman and one of a rare breed. The town is on  the Camino de Santiago and a useful point if pilgrims have boot trouble. He keeps soles of all sizes. Two weeks before the lockdown we had taken shoes to him. On the Monday when  France started to close down we realised we hadn’t collected them and rang him. He opened the shop especially for us, but he was nervous that the gendarmes would come past and fine him. That afternoon the lockdown began. He has re-opened this week in the imitation rentrée. His is a vulnerable small business  that deserves to survive.

Being the only male in a dormitory of females…………. 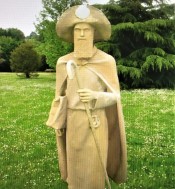 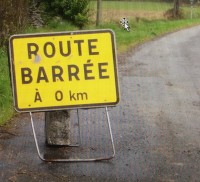