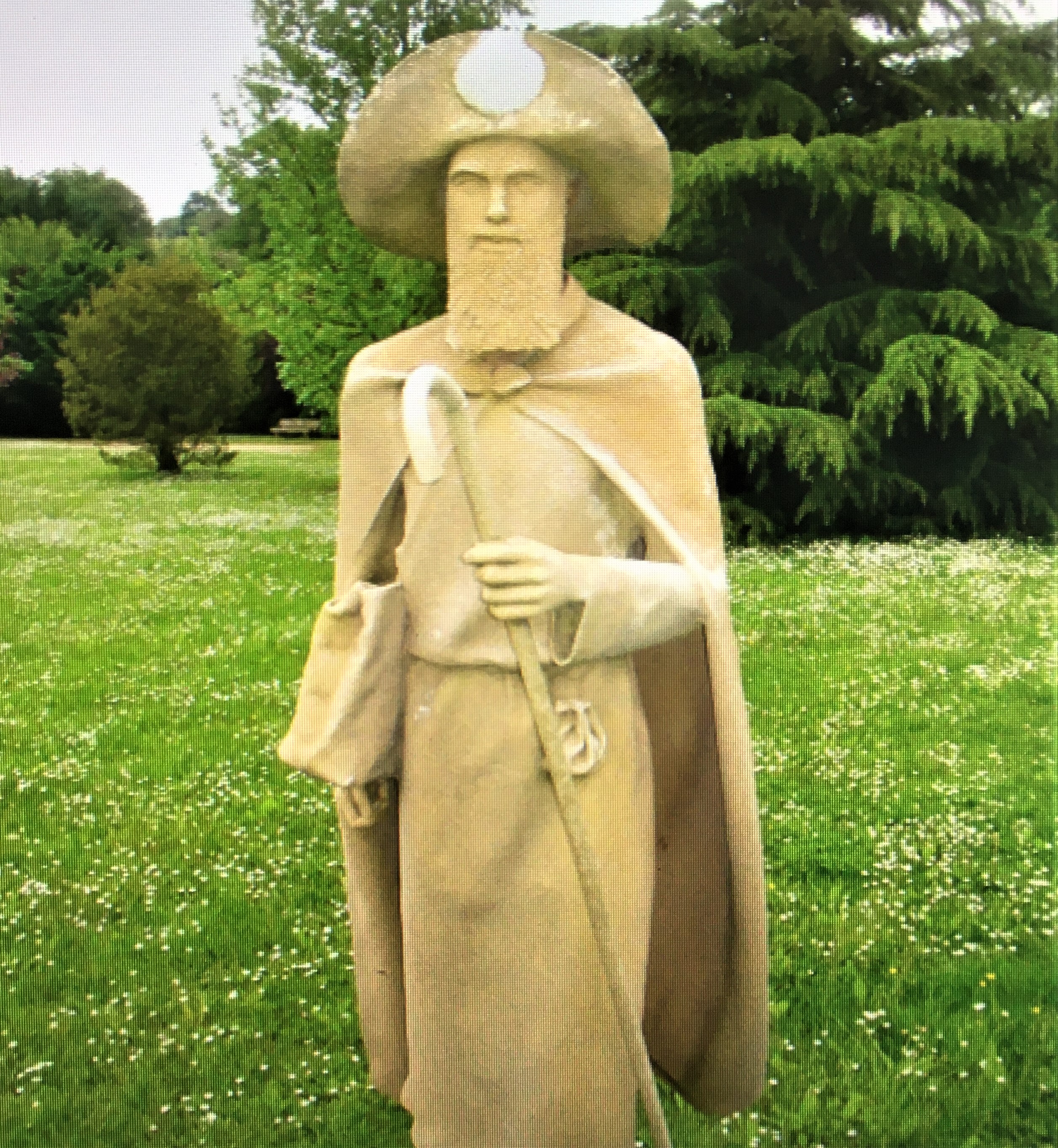 Being the only man in a dormitory of females was not envisaged but, candidly, rolling out of our sleeping bags before dawn, walking by torchlight before breakfast and then carrying our rucksacks all day in the heat, we appreciated any bunk to crash on, no matter what the company. In the first dormitory on our walk we were a diverse sextet; an older couple from Alaska, two newly weds from Israel and us British.

At breakfast the following day we were joined by a French pilgrim who sat opposite us and, apart from the obligatory bonjour, contributed nothing else. Madame eventually managed to extract a few words from him. He was plainly not in a good place; it might have been marriage problems or business complications but we never found out;  he wanted to give up the pilgrimage even though he had only just started. Madame did manage to persuade him to at least continue to Roncevaux where he could catch a coach back to Saint Jean.

We were on the last leg in France before crossing into Spain. As we were walking in the soothing shade  of these curiously bowed trees he bounded up behind us. He embraced Madame and said she had put new heart into him and that he would continue his pilgrimage to the tomb of Saint James. With that touching outburst he strode on ahead of us and we never saw him again.

It’s  easy to be judgemental about other pilgrims on the way.  You see them coming out of ho(s)tels with no encumbrances, apart from sticks and a small rucksack, whilst the rest of us lurch along like snails with their houses on their backs. That is our choice and if pilgrims want to send their baggage on ahead that’s their choice. They might not have been able to walk the Camino without help. The drawback of course is that you might not make it to the next point and be parted from your belongings. It’s a thriving business transporting baggage. You can cycle if that’s your preference but  the lower route via Valcarlos avoids the peaks. 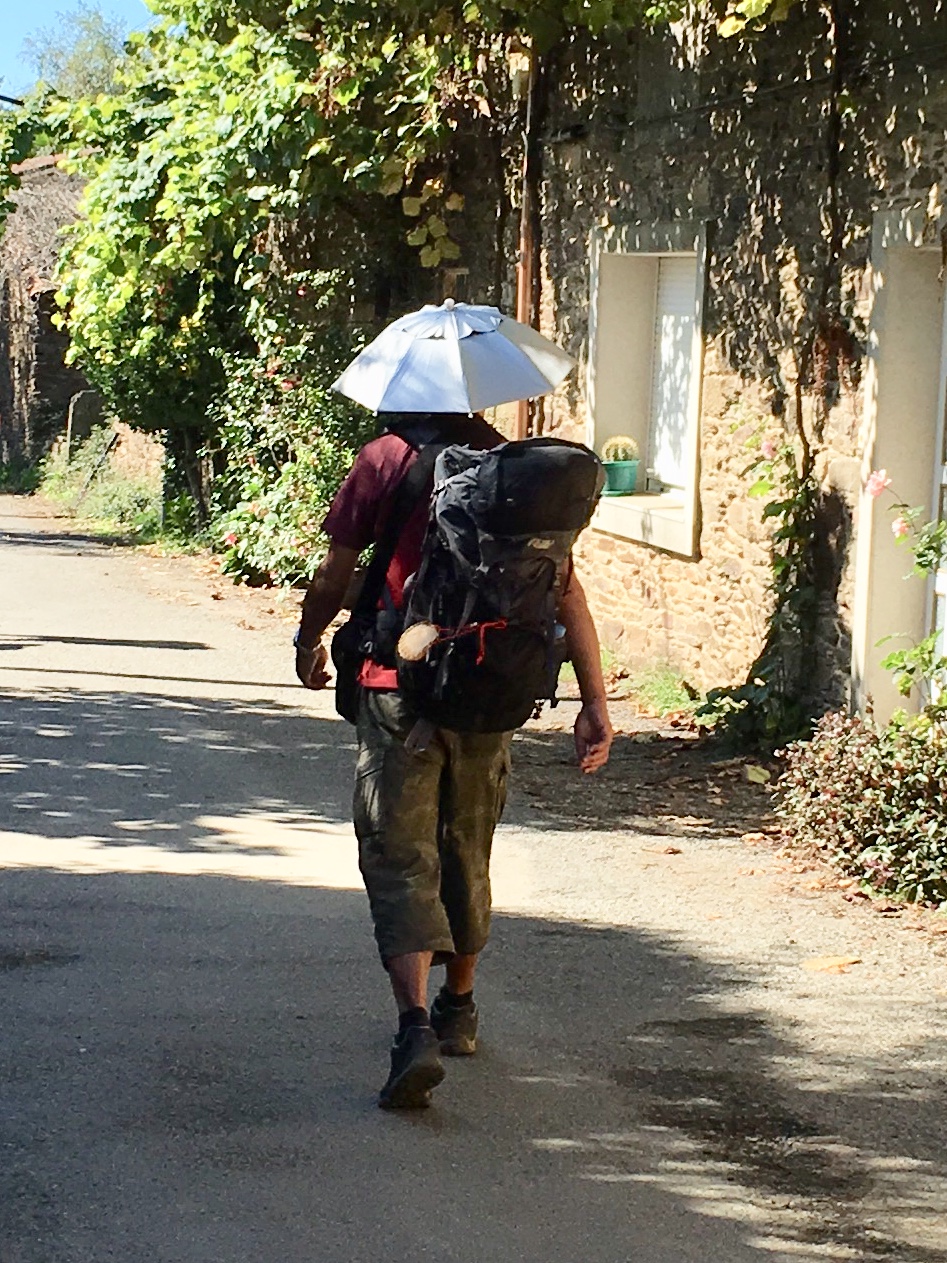 The lockdown began the day Madame and I  should have set off for Spain on the Camino Francés, to join up the gap we’d left last year on the ancient pilgrim route. We’d reached Santiago de Compostela and were the proud possessors of the beautifully inscribed and coveted Latin certificate. Madame now has two certificates having previously completed the pilgrimage with a French friend.

The compostela is the certificate of completion of the Camino de Santiago and is issued by the Pilgrim’s Office.  The queue was already long when we arrived soon after dawn; you take a ticket and wait, in our case two hours. There are two types of certificate: one is in Latin, issued to pilgrims who declare that they walked the Camino for religious or spiritual reasons. Your name will  also be written in Latin. The second certificate is for those who did it for cultural or historical purposes.

If you live in France, as we do, there is a choice of several routes but most will probably join up at Saint Jean Pied de Port (Donibane Garazi). This is the popular choice of long distance pilgrims, who can fly to Bordeaux and then take a train to Saint Jean. Tours often commence here but, having read the literature of one of the companies, I did wonder  if it was based on practical experience. I quote;

‘Walking the Camino is not difficult – most of the stages are fairly flat on good paths.’

The path from Saint Jean Pied de Port to Roncevaux (Roncevalles) is challenging.  During spring the route can be treacherous due to snow and other hazardous weather conditions. Last year a group of pilgrims had to be rescued when they became disorientated in fog. Versions vary but the distance is about 25km. Madame and I decided to stay overnight at the upmarket, and only, hostel at Orrison, which is 8 km out of St. Jean, but even that is a steep climb. This is recommended for pilgrims who have been on a long-haul flight and whose bodies haven’t adapted to carrying a rucksack. It was a wise choice; a short distance maybe but you can appreciate the height from this picture. 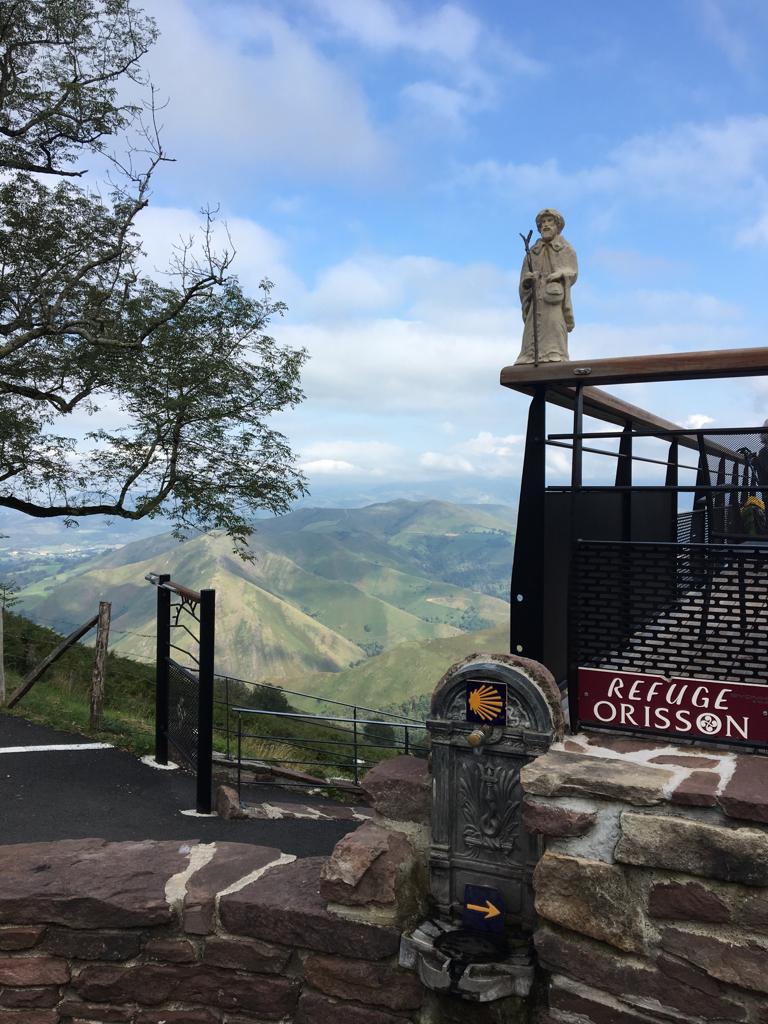 Traversing the Pyrenees on foot is an unforgettable experience. A medieval pilgrim was conscious of being closer to Heaven and felt he could touch it. The day we crossed the sky was blue and the panoramic views had a rugged beauty, but there was a fierce headwind that battered our ears and sucked the breath out of us. The climb seemed endless.

To celebrate the second stage of unlocking, for want of a better word, madame and I decided to retrace previous steps starting at Gibraltar (no, not the Rock). Not far from Saint Palais is the Stele of Gibraltar. An upright  stone, it may not look imposing but it    marks where the paths from Tours, Vézelay and Le Puy become one. 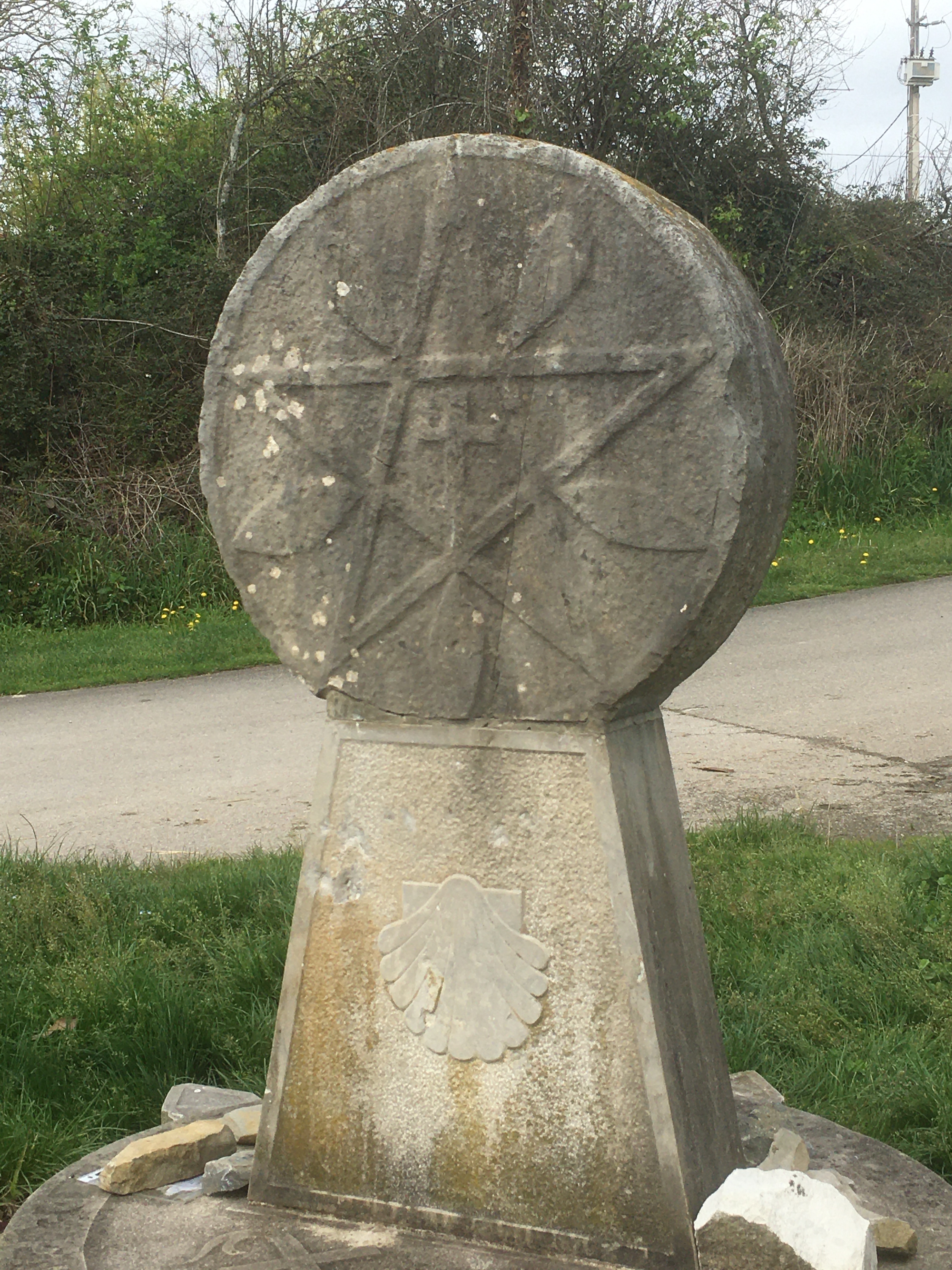 We climbed up to the chapel of Soyarz. If you’re a pilgrim you can sit on the bench there and admire the Pyrenees and probably wonder how you are going to traverse them!

The path then takes you down through the trees to the chapel at Harambeltz. Not grand from the outside but the  meticulously restored interior takes your breath away.

There are four houses in the hamlet. At one time you could knock on any door and be given the key to the chapel. Officialdom has taken over and only parties of 10 or more may book to go inside. Madame and I did attend Mass there one year and found ourselves on Basque TV.
What of the future?

You cannot walk the Camino if there is nowhere to stay and there is no evidence that ho(s)tels will open soon; tour companies are now looking ahead to next year.
2019 was a record breaking year. 347,578 pilgrims called at the Pilgrim’s Office in Santiago de Compostela. Subtract the winter months and that’s a lot of pilgrims every day.
There’s no doubt that  the film ‘The Way’ was an influential factor, especially in the United States. We did find that there were places where you fell over people, especially at the weekend and it was advisable to book accommodation ahead, something you never had to do a few years back said Madame. If you live near the Camino why not walk a section just for pleasure? We do because we live a short distance from it,  but we wouldn’t figure in the official statistics.
The final word (or picture) goes to Perry Taylor, whose sketches of French life are humorous and perceptive. The pilgrim is reproduced with his kind permission.
www.perrytaylor.fr 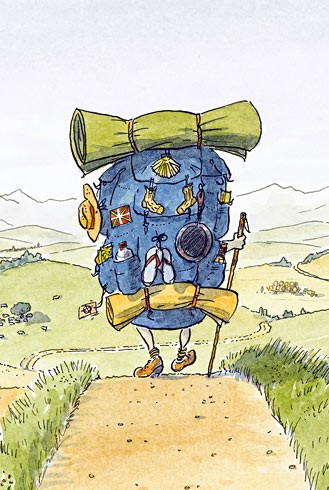