It ravaged London; trade and social life shut down. The royal court and parliament fled the capital until the epidemic subsided. The wealthy left for the country taking the disease with them. Sounds familiar? Plus ça change, meaning (broadly) that history repeats itself. We’re talking about 355 years ago this summer when the Great Plague struck.  People did not understand how or why it had happened. Bad air was one alleged culprit, but no connection was made with overcrowding and the appalling sanitation of the period. Doctors, if one could call them that, attended the sick wearing leather gloves, long clothing and elaborate masks, the beaks stuffed with fragrant herbs 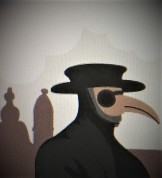 Ring-a-ring o’ roses,
A pocket full of posies,
A-tishoo! A-tishoo!
We all fall down.

Dismissed by some as a nonsense rhyme it is believed to  refer to the plague. ‘Roses’ for the red rash, the ‘posies’ the aromatic herbs to ward off the plague and ‘atishoo’ the sneeze, the fatal symptom that preceded the disease. ‘We all fall down’ was what happened finally.

Direct contact was avoided between traders and their customers, who put their coins into a bowl of vinegar. At parish boundaries, where there was often a demarcation stone, messages could be left if steeped in vinegar. At  our flower market one has to put coins on a long, narrow tray and the change is returned the same way. Afterwards I went to see Bernard at the droguerie to buy 95% industrial alcohol for wiping surfaces, today’s answer to vinegar. His shop is the kind that has died out in Britain – an ironmonger, hardware shop, whatever you like to call it. His is one shop that must not close; you can buy clothes pegs, paint,  mousetraps and much more. He buys his paint from over the border in Spain; it’s cheaper and superior to that in the large store.

When Madame and I  lived in rural North Norfolk it was thought that an abandoned medieval hamlet was located somewhere under the fields. It even had a name on an old map. There would have been a plague pit to cope with the bodies as the population of the county was decimated; some estimates have put fatalities at 40% or more. This was the Black Death, a pandemic which reached the British Isles in 1348, carried along the trade routes from Asia by flea infested rats. When another epidemic returned to Norwich in the 16th century lockdown was enforced. The city  authorities ordered that contaminated houses should be isolated. They were  bolted from the outside and windows boarded up. Occasionally the occupants survived. Now, in several villages in the county  extensive research is being carried out to unearth artefacts of the  years  when epidemics struck; perhaps a plague pit will be discovered.

If all this sounds familiar it is – pandemic, isolation, lockdown. What about ‘social distancing?’ This is an acceptable way of saying avoiding; ostracising is too strong a word now but one that would have been used against lepers. Leprosy is spread by moisture droplets passed through the air from someone who has leprosy but is now treatable. It is not uncommon; 250,000 new cases a year is one official figure. There is evidence of it in existence in India in 2000 BC ( or BCE if you prefer).  In the picture a leper is denied entrance to a town.

Sufferers who came from wealthy homes could live in isolation; the not well-off, if they were fortunate, might be tended by monks in hospices, sometimes known as lazarettos or lazarets; presumably named after Lazarus the beggar. A few years ago an archaeological dig unearthed the remains of a lazaretto in Marseilles. This was a city vulnerable to any plagues that were circulating the Mediterranean, being on the major trading routes. Substantial hospices still stand like this one built in the 17th century by the Knights Hospitaller in Malta.

If lepers weren’t in these two categories above social distancing took on a more heartless form. Feared and ostracised they were frequently doomed to wander the country wearing signs, ringing bells or carrying a clapper to warn of their approach.

Infectious diseases, dispersed from one country to another usually by trade, remain today, as in the past, a threat to society. We do not know how COVID-19 will develop. Hopefully it will soon recede and a vaccine be produced. Until then we must keep our distance.

One thought on “7. Keep your distance”